City
Search
Home NEWS Xiaomi teases Xiaomi Mi A3, and it going to be crazy good...

Xiaomi launched the Xiaomi Mi A3 teaser campaign with a small price detail. He responded to a year long tweet that called the Mi A2 a “crazy bargain” and suggested that the new model would be even better.

Thus, the Xiaomi Mi A3 costs less or offers better specifications for the same price. We know the main lines of the technical datasheet. Both models are based on the new Mi CC9 phones.

Xiaomi has not yet announced the European prices, but the conversion of the Chinese prices brings us 230 € for the Mi CC9 and 170 € for the Mi CC9e. Once European taxes are counted, prices should be at the level of the previous year. 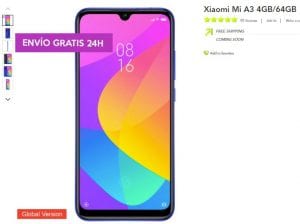 PowerPlanetOnline already lists the Xiaomi Mi A3 with the exact specifications of the CC9e (and not the CC9). The model number associated with the CC9e is also listed as “Mi A3” in the Ting operator database.

The names may change, so the Mi CC9-based Android One phone is the “Mi A3 Pro” or something similar. By the way, the memory list contains the original chipset. There is therefore no confirmation for the alleged update of the Snapdragon 730 and 675.