Earlier in the day, we had a gap in the Specs and in the rendering of the Xiaomi Mi A3 telling us what to expect from this smartphone. And now an anonymous tipster has sent us some pictures of the Mi A3 and its sales box confirming the key design and technical specifications of the phone.

The white box confirms that the Xiaomi MI A3  will be available in blue and white. On one of the pictures, however, the phone is also shown in black. The Xiaomi Mi A3 has a notched screen on the front and back and a vertical triple camera in the upper left corner. You can also see that the Xiaomi logo is in the lower-left corner of the back and the brand name is Android One on the right. 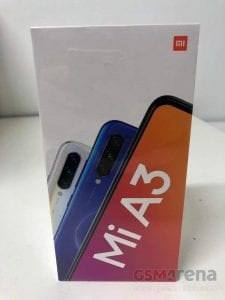 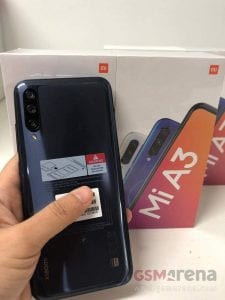 Additional features include a 6.08 “AMOLED display, a UD fingerprint reader and a 4030 mAh battery with an 18 W fast charge function.

All these details indicate that the Mi A3 will be a global version of the recently announced Mi CC9e. While the CC9e is equipped with an HD + display, the A3 should have an FHD + panel. In fact, this makes sense since the Mi A2 has an FHD + display and Xiaomi does not want to start his successor with a lower resolution screen.