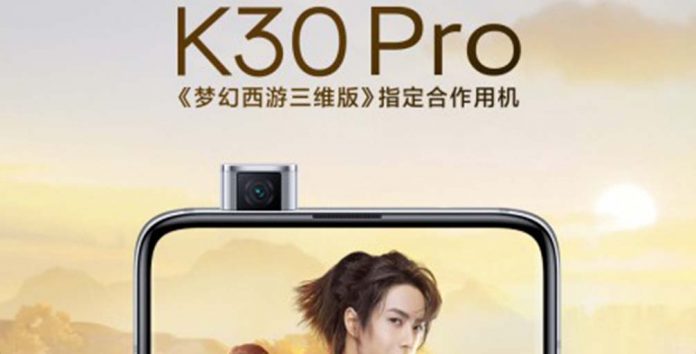 The Redmi K30 Pro is expected to be officially launched on March 24, and the past few days have been filled with leaks and teasers for the next flagship. We now have two posters shared by the official Redmi Weibo director, as well as new specification clarifications. The first picture gives us an overview of the white color variant of the device. It shows the rear glass display case, the metal frame, and the red power switch.

The second poster shows the phone’s pop-up selfie camera and the screen with no notch. He will be accompanied by characters from Fantasy Westward Journey 3D, confirming that a limited edition of the Redmi K30 Pro will be on the way during the big announcement later this month.

We also received confirmation from the K30 Pro’s linear vibration motor, which is said to provide superior tactile feedback and quick response times. Redmi claims to have successfully optimized the new vibration motor for more than 150 MIUI scenarios. It also confirms that the screen is TÜV certified and that the device comes with Game Turbo 3.0 for a more optimized gaming experience.

In case you missed it – yesterday we looked at the blue version of the phone alongside some benchmarks to show its performance.