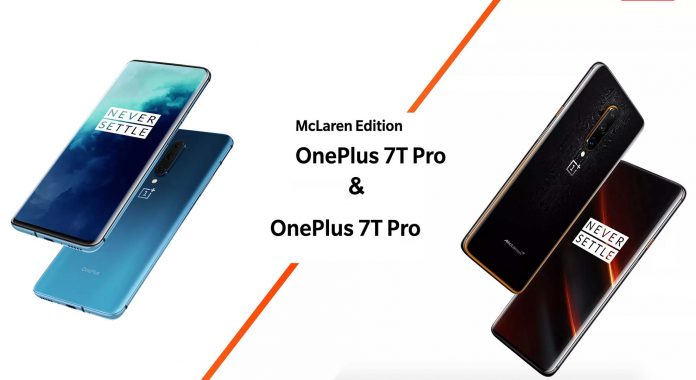 The OnePlus 7T Pro is official and comes with the typical upgrades nothing more important than adding a “T” Letter and they also Launched OnePlus 7T Pro McLaren edition whose appearance is inspired by the legend of the race McLaren.

The OnePlus 7T Pro is powered by the Newly Snapdragon 855+ chipset. Thanks to higher clock rates, it promises 15% better graphics performance. There is only one memory configuration available, 8 GB of RAM and 256 GB of memory (UFS 3.0). The 6 / 128GB and 12 / 256GB versions of the One Plus 7 Pro have been removed. If you need 12GB of RAM, 7T Pro McLaren Edition is your only option.

OnePlus 7T Pro now supports Warp Charge 30T – the “T” version is 23% faster than the 30W charger introduced with the OnePlus 7 phones. The camera is the same as 7 Pro with 7T macro mode.

The OnePlus 7T Pro McLaren Editions have 12GB of RAM and 256GB of storage. His back has a symmetrical wood grain and yellow papaya on the sides. You also get a soft shell made of Alcantara, a popular material in the automotive world.

Both phones start with OxygenOS 10, which is based on Android 10 (you guessed it). The McLaren Edition features exclusive features such as McLaren wallpapers and icons, as well as notifications that illuminate the curving sides of the orange papaya brand.

In addition to the EU, the 7T Pro comes to India, China, and Hong Kong. OnePlus 7T Pro Price in India is INR 53,999 for the standard 7T Pro and the OnePlus 7T Pro McLaren Edition Price is 58,999 INR. In particular, the phone is not available in the US.